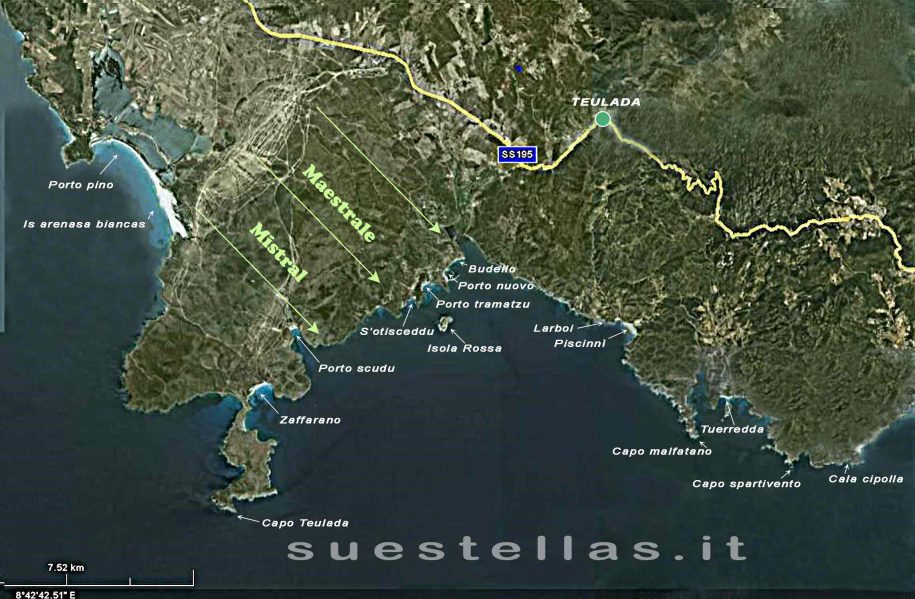 Beaches and coves sheltered from the mistral Teulada

The gulf of Teulada, thanks to its position, gives the possibility to choose where to spend the day according to your preferences. An important thing to keep in mind when planning your day is the weather. A careful evaluation can mean that you don’t have to regret the evening of going to the beach. So the morning before leaving, look at the weather forecast, there are now many Apps that you can download on the play store on Android devices or on the App store on Apple devices. I can advise you, among the most used and most reliable, ilmeteo or 3b meteo. An App that I often use and suitable especially for those who practice sailing is Windguru old this gives you in a single screen the seven day weather situation with graphic display of the wind. You have to be careful with the settings on the wind scale, it is normally in km / h but it is often in knots. One knot corresponds to 1,852 km / h. Some apps allow you to change these settings. Once you open the app and see the type of wind and its intensity, choose the place to go.

The mistral in the Gulf of Teulada

In this article I give you advice on where to go in relation to the mistral wind. The mistral is one of the dominant winds, it can remain for several days and often reaches 25 knots (46 km / h) in intensity, it is a fresh wind that comes from the north / west which in summer, if it is not very strong, it is also pleasant because it gives us nice days without the strong summer heat. Often the mistral is accompanied by sudden bursts that can increase by 5 or 10 knots compared to the normal intensity of the moment. A mistral wind between 5 and 10 knots does not create problems but is, as I said before, pleasant. When, on the other hand, it exceeds 15 knots you must be careful where you intend to spend the day. With this wind intensity you stay away from the wide and sandy beaches, the wind slams the grains of sand on you as if they were small pins. The sand slips everywhere, you find it in your ears, pockets and beware of cell phones. In the Gulf of Teulada the mistral does not generate very rough sea, this because it comes from the mainland.

Beaches and coves sheltered from the mistral

Here I want to show you the beaches and coves sheltered from the mistral, starting from the most sheltered, where you can go in peace even in strong winds. Let’s start with the coves suitable for strong winds. The first is the cove of Larboi. Here you can enjoy the day in relaxation even with the mistral and sirocco wind up to 20 knots. The cove has no sand but small round and very white pebbles that are not raised by the wind. They follow the coves of the tower of Piscinnì, these equally have no sand but small pebbles. To get there you have to walk a path of about 300 meters. Now let’s move on to the beaches where to go with the wind that must not exceed 15 knots. The beach of Piscinnì, very sheltered from all winds, ideal for families with small children because the depth of the water drops gradually. The Malfatano beach, also very sheltered and served by a restaurant and bar service. The beach of S’ortixeddu small but beautiful. now the beaches follow with a mistral wind that does not exceed 10 knots. First of all certainly Tuerredda, the pearl of southern Sardinia, here for details read the dedicated article. The beach of Is arenas biancas, with its white dunes. Porto tramatzu beach. The beaches of Porto Zafferano and Porto scudo located in a military area and accessible only by sea. I hope I have been of help, read also the article on the beaches sheltered from the sirocco. If you liked the article, write your comments below.