Tomb of the giants Barrancu Mannu

Tomb of the giants Barrancu Mannu

For lovers of archeology and mountain walks, a visit to the tomb of the giants of Barrancu Mannu cannot be missed.

The excursion begins after passing the village of Barrancu Mannu, a hamlet of Santadi, for about 150 meters. Here you can choose whether to leave the car at the intersection on the paved road or continue to the parking lot located about 300 meters along the path.

The path to get to the tomb of the giants is about 2 km, the first part is easy to walk while in the last part the path becomes steeper and more inaccessible. I recommend visiting in the coolest hours and avoiding very hot days.

At the end of the article, you can download the route layout in GPX format to be used in most of the enabled trekking apps. 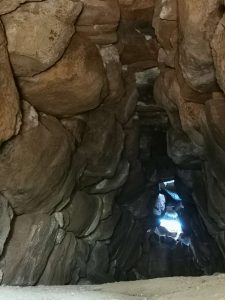 The tomb of the giants Barrancu Mannu

After the effort of the climb, the sight of the tomb, which appears suddenly, is gratifying and spectacular.

In Sardinia there are 321 tombs of the giants they were used for the burial of the inhabitants of the surrounding area, they date back to the Nuragic era and are dated between 3300 and 700 BC, in the Bronze Age.

The building is made up of large blocks of pink granite with a small opening in the center surmounted by an architrave as an entrance to the tomb. 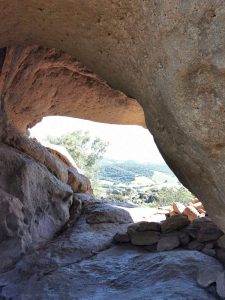 In the tomb of the giants of Barrancu Mannu the interior consists of a central trapezoidal-shaped corridor about 10 meters long and about 1.5 meters high, a large part of the tomb has collapsed and entry is not recommended. It has a curved front part about 18 meters long and 5 meters high called an exedra.

I recommend that you search the area around the tomb, a few tens of meters away you will find an opening carved by the wind on the rocks. The tomb is located near the natural park of Gutturu Mannu, which offers hiking enthusiasts magnificent nature trails.